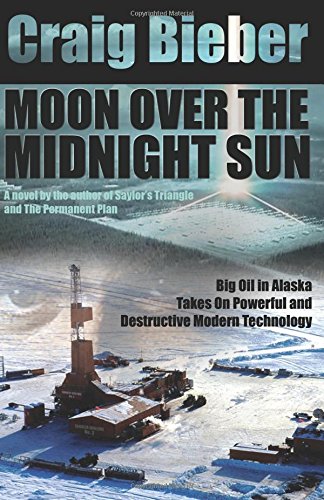 Moon Over the Midnight Sun

Moon Over The Midnight Sun continues the saga of the Saylor Family in Alaska.  Chris Saylor, younger sibling to Nick and Beth Saylor, becomes the protagonist.

Chris parlays his stellar rig floor to boardroom oilfield career into a vice presidency and ownership position with a successful, privately owned oil company in Alaska.  Through mergers and acquisitions typical to many that happen in the oil industry, the small company becomes a major player in the oil business in Alaska.  It is orchestrated by oil company owner, Burton Marts, who becomes a mentor to Chris.

Burton’s beautiful wife, Jane, whose mid-life association with a bizarre cast of characters impacts the story greatly, plays a major role in the eventual creation of the Marts Seastrom Oil Company.  Along the way, her sexy choices help to expose the seedy side of life on the street in Anchorage and brings many flawed characters into the story.

Chris is becoming settled in the trappings of success when his company faces a challenge he could have never have imagined from an amazing and frightening new technology.  The amazing capabilities of the technology are driven to destructive use by the vindictive agenda of  it’s owner.  It all takes place on land in the Arctic owned by Chris’s company, and, with a reluctant US Military unwilling to help, he becomes the leader of the effort to prevent a disaster.

Through it all, members of an Alaska Native Village Corporation sit quietly in the background…waiting for The Raven.

To Buy Moon Over The Midnight Sun through the Website, using Pay Pal, click on the following Buy Now Button.