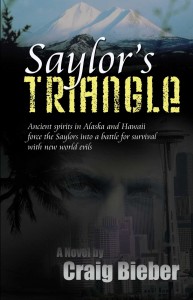 is an adult action drama that is full of suspense and mystery.  It takes place in Alaska and Maui, with an unexpected connection to Seattle. Nick Saylor is a wealthy man when he retires on the island of Maui. Sister, Beth, is left in Seattle as president of Saylor Industries, and her flawed ex-husband, Devon, becomes the Alaska manager who heads their company down a path of destruction with his affinity for criminals, loose women and dirty money.

Devon connects with a marijuana grower in the Matanuska Valley, which is where some of the highest quality marijuana in the world is grown.

Nick is drawn back into the business by the mystical warnings of a new kapuna friend in Maui, and an Alaska Native spiritual leader. Soon, Beth and Nick race drug dealer, Geno, and an eclectic cast of characters to a surprising finish.

Saylor’s Triangle was published in early January of 2008. It has been described as a book with great characters, a wonderful setting, unflinching grittiness, and power. Readers frequently call it a page turner and a book that they couldn’t put down. It is an adult book, and a great read…if you like action, drama, romance, and mystery.

See information about Saylor’s Triangle, and other Ghost River Images books at ghostriverimages.com. 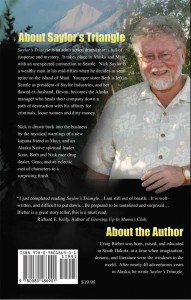